“During the creative process I play with non-identity, false identity, hidden identity, performative identity in order to question different ideologies, hierarchical social relations and binary structures that establishing differences between genders and subjects. I hope that transformative identity is capable to open up a new horizon for different scenarios of experience and brake prevailing sociopolitical patterns.”  KI 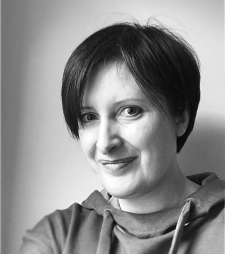 “Kristina Inčiūraitė, Lithuanian female artist who regularly deals with gender issues, provides another strategy of becoming-imperceptible, because she works not with bodies or substances but with mental images. Inčiūraitė’s videos usually depict female characters in their specific social environment but the most important thing is that these female figures are not visible on the screen. In other words, the visible and perceptible dimension is suspended in order to demonstrate mental connections between what is visible and what remains invisible. This invisibility prompts the spectator to think about the social and political status of those who are missing in the screen. (…)

This specific visual strategy by Inčiūraitė’s videos can be related to Deleuze and Guattari’s idea that subjectivity, desire and sexuality should be detached from its anthropomorphic forms (Deleuze, Guattari 2004a: 324–325) and move toward becoming-imperceptible. Deleuze and Guattari see this move as the only way to evade the molar forms of subjectivity and sexuality and to subvert the dominant regimes of patriarchy. In this sense we can speak about the politics of imperceptibility, which questions the dominant scopic regimes not by demands to make one or another social group visible but by following the path of becoming-imperceptible. Here again all the features mentioned by Deleuze and Guattari become relevant: to become anorganic or imperceptible, to become the asignifying or indiscernible, and to become asubjective or impersonal. All three features are at work in Inčiūraitė’s videos: first there is the dissolution or evacuation of the body, the “organic” body, which is the “natural cause” of representation. When the body is dismantled or lost, representation itself loses its “natural” referential anchor. Second, on the level of signification and interpretation, we enter a zone of indiscernibility where it is impossible to decide between the virtual and the actual, between the real and the imaginary, the visible and the audible. And third, these videos create an impersonal or inhuman perspective where desire is pinned up not to the human subject but to different individualities or heacceities – water, coldness, and duration – the passing of time.”

“Kristina Inčiūraitė is one of the most interesting Lithuanian contemporary artists. She constructs her photographs, drawings, film and video works like a functionalist building with the communications systems brought to the outside. The artist is concerned with the collision of reality and fiction, as well as the links between imagined and real history. Inčiūraitė’s personal historical research is based on intensification of the experience of the present, rather than on archaeology or ethnography. Instead of passively watching the images, the viewer engages in narrative construction by assembling his or her own version of the story from shots and narratives.

The voice is one of the primary elements of Inčiūraitė’s films. It serves as the protagonist – we almost never see the ones speaking. Voice-over narrative rejuvenates everyday images and personifies landscapes and interiors. Often the artist tells the stories of women and voices their experiences – and therefore deliberately avoids showing her protagonists. The objectifying gaze of the camera turns women into beautiful things, examines and undresses them, but does not listen to them. Kristina is more concerned with what they are saying, and particularly with what they refuse to tell – the things that have to be heard in pauses and preteritions.

Kristina Inčiūraitė explores site-specific biographies: how the environment influences people’s choices, and how today’s dramatic situations change the remaining Soviet architecture. The urban landscape is not just a background; rather, it is an important, perhaps even the main character. The district of Lazdynai in Vilnius (LT) and the towns of Druskininkai (LT) and Svetlogorsk (RU) are distinguished by their architectural ambitions and the prominence given to the landscape. At the same time they are monuments of vanishing grandeur, which hold on to their ghostly existence. The artist gives voice to the latter, interweaving it with cultural (Wagner’s opera) and personal (dating site) contexts. The Svetlogorsk elevator, once a symbol of modernity and the bright future, is now defunct and is merely a projection of the film’s protagonists’ unfulfilled expectations. Yet at the same time it is a time machine, which transports the viewer to another era and discloses the structures of the world of illusions.”

Laima Kreivytė is independent curator, lecturer at the Vilnius Academy of Arts and the European Humanities University, Vilnius