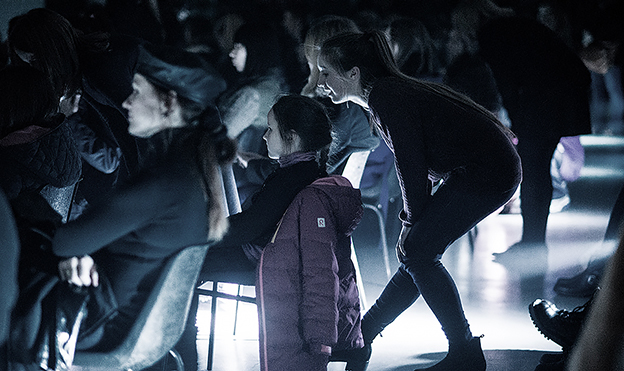 Video:
“The Fragment as a Proverb”, 2014, 25 min, no sound, visual material by Mariko Takagi, the excerpt from Hirohito’s monologue is used (it’s taken from the film “The Sun (Сóлнце”), 2005, directed by Aleksandr Sokurov). 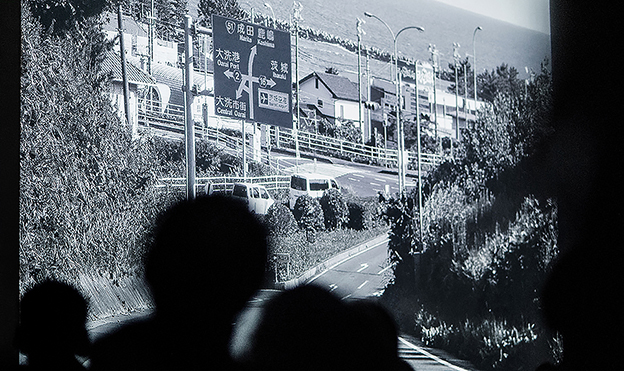 Music:
Liepaitės are humming the popular tunes they like for randomly selected listeners.
Mariko Takagi is whistling the tunes from her own repertoire: these are the songs from films of the Walt Disney Company, from the musical “The Sound of Music” (1965), and the song “The Whistler and His Dog” (1913, composed by Arthur Pryor) that is popular among whistlers. Its a focus on American music production.

Kristina Inčiūraitė presents a laconically expressed art project “The Fragment as a Proverb”, together with the Liepaitės girls choir, with its long tradition of singing, and Mariko Takagi, a whistling virtuoso and a champion of several international whistling contests. This is a performative concert, conceptually extended by video projection.

Reflecting on the state of contemporary culture, the philosopher Bernard Stiegler expands Gilles Deleuze’s idea of ‘control societies’, and points out that aesthetics has become a powerful weapon in economic warfare. Today’s audio-visual technologies, like an instrument of capitalist marketing, control and shape the choices made by society. The philosopher highlights the intense production of temporal industrial objects (like a song or a film that continues in the time of its flow, and coincides with the time of our consciousness), which draw many people under its control, simultaneously listening to the same tune or watching the same film. These are unified experiences, in which a certain ‘symbolic misery’ comes through: our choices and our individual desires are reduced.

In our technologised culture, song recordings have become widespread, and by being constantly repeated, they have become part of our memory. Agnès Jaoui, the screenwriter of Alain Resnais’ film “On connaît la chanson” (1997), once said that by gathering popular songs for film, she used fragments of songs like proverbs. According to her, the commonplaces rooted in the words of popular songs summarise feelings, and at the same time they impoverish them. By using a reduced form of song (humming or whistling) these problems of ‘impoverished’ experiences come into focus in the project “The Fragment as a Proverb”.

In the performance, various pieces of music are performed by singers individually: the participants select listeners randomly, and hum a selected popular tune into their ear, while the rest of the audience awaits an intimate experience. Humming, a reduced form of song, which represents the ‘impoverished’experience, in this case probably becomes the ‘enriched’ experience: the tune becomes personally desirable. The melody, as a part of our memory, raises questions about our social behaviour. What do we, singers and listeners, have in common? Do we share similar emotions and experiences?

Later on during the performance, while Mariko Takagi is whistling the popular tunes, some moments in the daily life of Fukushima and Ibaraki Prefectures are represented in video projection (private photographs by Mariko Takagi). Several details from the narration of the film “The Sun” (Сóлнце, 2005, directed by Aleksandr Sokurov) are embedded in this video. It takes us back to the early 20th century, when Japanese people tried to settle in America, but the Immigration Act of 1924 prohibited them from coming to the country. After a while, the controversial law was changed. Historical facts are combined with the contemporary Japanese context. Mariko Takagi is whistling some American tunes that are popular in Japan, and these tunes are like a the soundtrack to the film. Promises of a better future are like echoes of whistled tunes …

One part of this musical performance (humming of popular tunes for randomly selected listeners) was implemented twice in 2017, featuring the boys’ choir Dagilėlis at the Šiauliai Art Gallery, Lithuania, and “Studio Wocalu” at the Baltic Gallery of Contemporary Art (BGSW), Poland. In 2018, the same part of the performance was presented together with Latvian singers (Dārta Drava, Lauma Matule, Līga Saija, and Ilze Amanda Zakrevska) in the frames of the Riga Performance Festival: “Starptelpa” at KAŅEPES Cultural Centre, Riga.