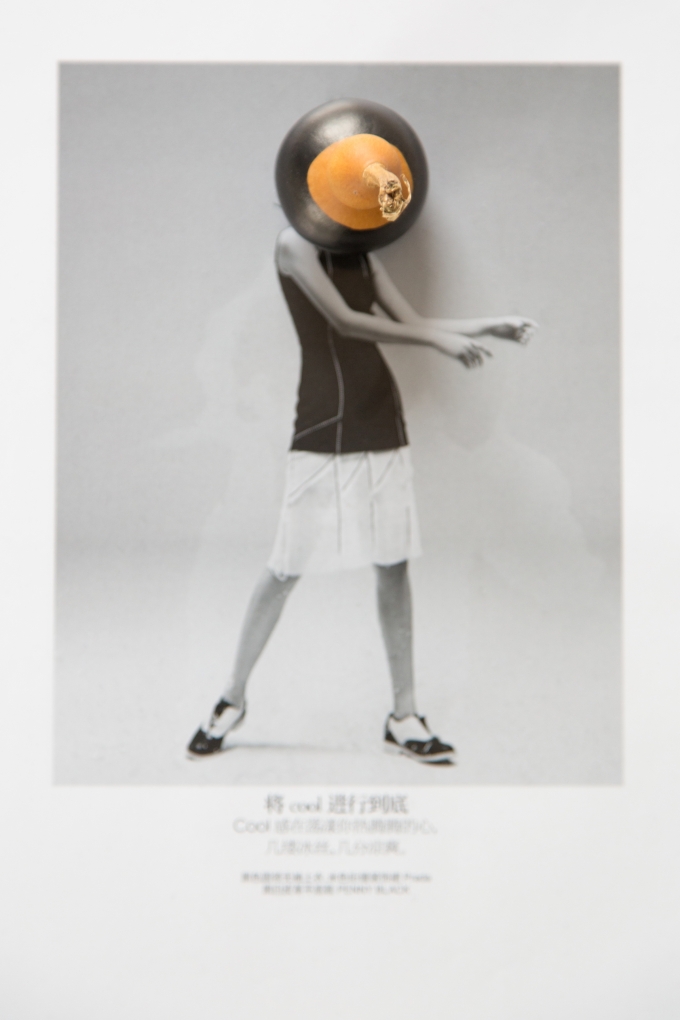 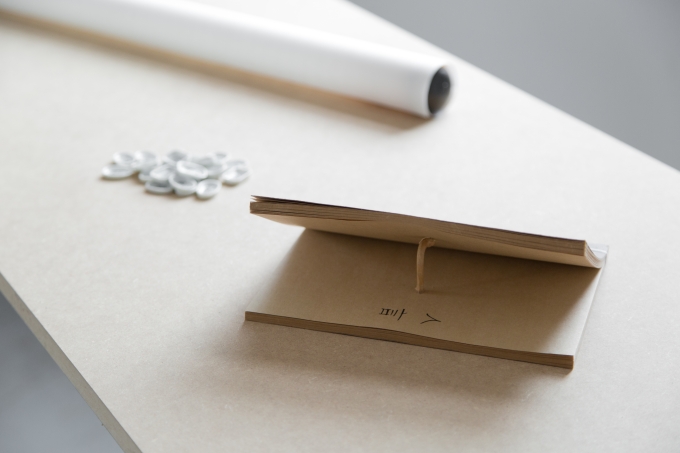 What lurks in the shadows? Chinese crickets that embody different shapes in the art project by Kristina Inčiūraitė. They migrate in the moving images and objects. By chirping loudly, they cure wounded souls, although they balance between life and death: the songs of male crickets attract female crickets and parasitic flies (Ormia ochracea) simultaneously. So sexual and natural selection appear to have opposing effects on the evolution of male chirping behavior in this species.

There is also an “industrial selection” of crickets. In China people have appreciated crickets since ancient times; they catch them in fields, sort them, breed them, also enjoying their chirping or even organize cricket fighting. In Chinese markets it’s possible to find a huge number of crickets. They chirp in various baskets, gourds, and cases and their sound could be associated with noisy construction in China.

Because of increasing economic growth in China, construction is widespread there – new cities and extensions of existing ones are appearing on China’s horizon. However, rapidly growing housing developments are not promising a better and more comfortable life as quickly as expected. In China the phenomenon of ghost cities has arisen. It happens mostly in locations where expensive apartments have been offered for sale without infrastructure development. Usually such luxury apartments can be found in thematic residential districts that imitate European or American architecture: houses in Italian, English, French or Austrian style or Manhattan skyscrapers that attract the locals with Western lifestyle rather than with local urban identity.

In 2015 Kristina Inčiūraitė had a research trip to China and filmed one such thematic real estate object – the housing development of Tianducheng, a smaller scale replica of Paris with an Eiffel Tower that was built in 2007 on the outskirts of Hangzhou, a few hundred kilometers from Shanghai. However, it is not a luxurious Parisian paradise; scantily inhabited and unused commercial premises on ground floors illustrate inactive urban life. What would happen if the copy of Paris changed place with the original, or the copy surpassed the original? The plagiarism postulating world of shanzhai occupies a bigger part of a horizon where objects are smaller and their shadows are bigger. Probably it’s possible to deconstruct the structure of representation, where the object corresponds to its copy. In other words, object repetition brings the deviation, some kind of perversion, and for this reason a copy not only becomes distant from its object but perhaps eliminates the principle of representation itself. 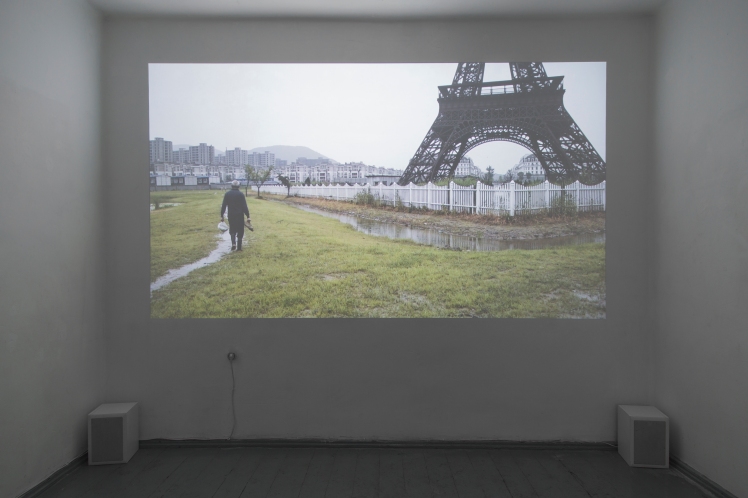 In order to reflect this “problematic” situation in the art project “The Echo of a Shadow”, Inciuraite describes it by choosing the metaphor of illness and looks back at women poets of late-imperial China who wrote about their experiences of being sick. In the main artwork – an experimental documentary with the same title as the art project – a few poems by Chinese poet Gan Lirou (1743-1819) are presented, in which she articulates the experiences of being sick. Her poems, which are written during different phases of her life (in youth and in older age), draw the conclusion that by sending away idle sorrow that arose during illness, its possible to “recover naturally without any medicine”.

Another example chosen for the film is from the movie “Longing for the Rain” (2013) by Chinese director Yang Lina, where the main character is debilitated in a different way – in the present commercialized epoch the woman becomes a passive consumer, who begins longing for deeper experiences capable of enriching her flat and materially provided life. The ghost-man is located inside the woman’s soul and visits her in her dreams. And her dreams become much more realistic than her true life. Afraid of becoming mad, the woman appeals to a Taoist monk for help – she wants him to cure her soul.

In the film “The Echo of a Shadow” Inciuraite transforms an excerpt of a monologue by the Taoist monk as she tries to find the best solution to the problem of how to cure the contemporary woman. Her inner ghost-man transforms into a ghost-cat and finally into the ghost-cricket that “saves” her soul. The heroes of this film are found at the Wanshang Huaniao market in Shanghai. There are various animals for sale, especially crickets.

The ghost-crickets come out from the shadow kingdom of simulacra and become soul “healers” – they awake sleepy sensations or even offer an alternative wild and unexpected world for people who wish to run away from the restrictions of social stratification, commercialization and stereotypes.

The 2-channel video “June” shows crickets enclosed in jars at Shanghai market and an abandoned amphitheater in Tianducheng. The woman in this film is imprisoned in the landscape of Tianducheng, much like the lonely crickets in their jars. In order to reflect this situation, the metaphor of illness is expressed in the similar manner as in the aforementioned film “The Echo of a Shadow”. The most common terms of women’s poems related to illness (late-imperial China) are used alone or as parts of title designations (author of the classification: Grace S. Fong). 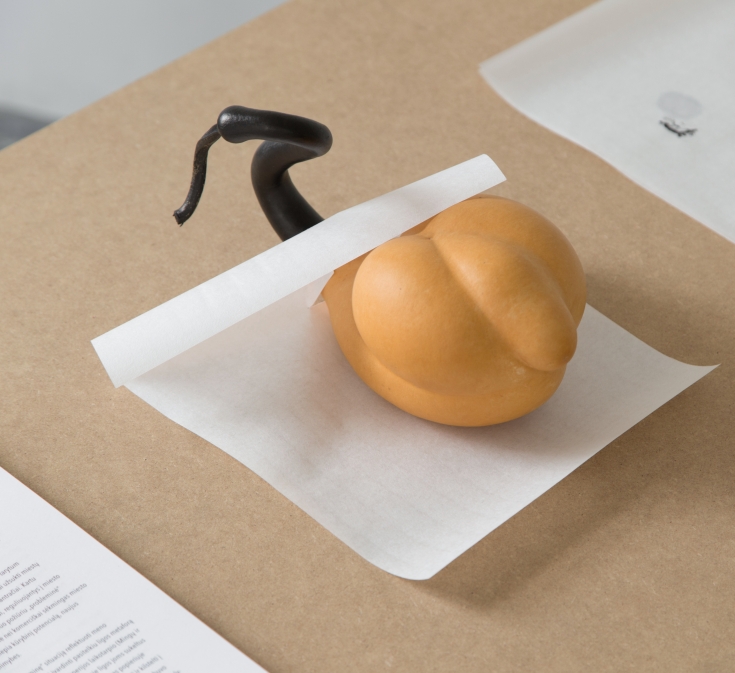