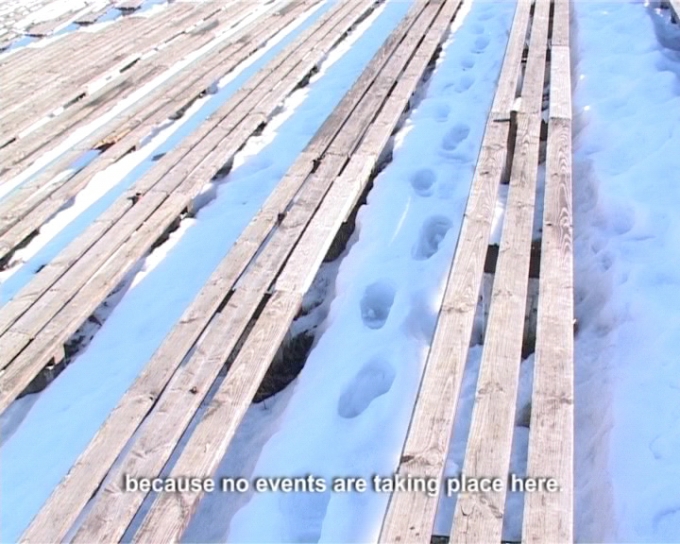 “Fire”, 2005, single-channel video, 5 min 30 sec
The video shows the abandoned outdoor summer concert stage of the Šiauliai city park (Lithuania), quite popular with a youth audience in the Soviet period. However, over the course of time less and less events are held in this venue. Šiauliai schoolgirls appearing in the video are rather pessimistic about the prospects for cultural initiatives in the city and talk about the dormant city life. Their gloomy thoughts are interrupted by sounds from a concert dedicated to the annual fire fighters’ festival held on the summer concert stage. In the words of Šiauliai residents, this concert is the only remaining popular open-air event in the city. However, no matter how cheerful it may be, the city is becoming more and more boring, and young people perpetually move to larger cities.

“Fall”, 2005, single-channel video, 4 min
The video starts with a short story about the “Ozo” video rental – an employee tells us about the oldest video rental in Lithuania, mentioning the declining quality of videotapes. As new tapes do not find their way to the archive, the video rental can expect the same sad future as the “Ozo” cinema —a once popular and famous venue.

Sound-bites from the monologue by the heroine of “The Fall of the Roman Empire” (1964) played by Sophia Loren, in low-quality Russian-dubbing taken from the video rental, appears as a concluding soundtrack. It helps us draw a parallel between the fall of the Roman Empire and the ‘golden age’ of old cinema theatres in Lithuania, which is near extinction. 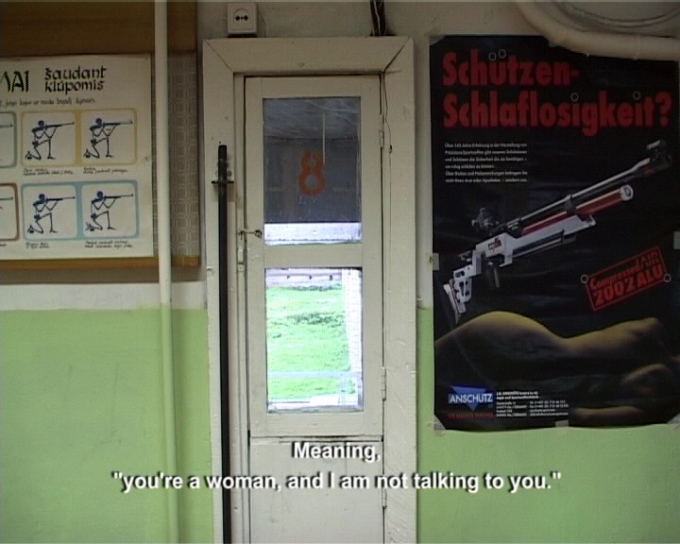 “Order”, 2004, single-channel video, 6 min
Two young women police officers talk about their work in the Vilnius public police. As it is a tough job it requires hard physical and psychological training. The police officers speak sensitively about their work experience: telling that there are not enough shooting lessons, and their gender and relative youth can sometimes hinder their work.

The police officers’ story is accompanied by images of a suckling bitch frantically running around, and an abandoned shooting-range. The visual material is reflective of the police officers’ situation. The final scene of the shooting-range reminds us of an empty theatre stage, where the performance of life has been played-out, and alludes to the female police officers’ dejected moods – ant the fatigue and sadness that sometimes remains with them after a hard working day.

“Shutdown”, 2004, single-channel video, 6 min
The “Gintaras” Hotel, which was one of the most luxurious hotels in Vilnius with a large popular restaurant, shut down in 2002. This Soviet hotel has recently been renovated, and its name has been changed. Consequently, the old atmosphere of the hotel vanished. All that has remained unchanged is the sign “Gintaras” on the roof of the building and the disused restaurant with its fancifully decorated stage. These remaining attributes of “Gintaras” Hotel have been captured in the video, which emanates nostalgia: the sign of the non-existent hotel is flashing and inviting us to come in, the empty hall of the restaurant resounds with the music from the show held on the occasion of the closing-down of “Gintaras” Hotel, while a member of the band “Bobų vasara” (“Indian Summer”) and a bar-maid share their recollections about the closing-down party, which carried the luxury and clamour of the hotel into oblivion.

“Leisure”, 2003, single-channel video, 5 min
“Leisure” is set in Visaginas, the newest town in Lithuania, which was built in 1975 to house employees of the Ignalina Nuclear Power Plant.

The singing of a youth choir rehearsing in the Visaginas culture centre reverberates around the empty stage. The words of the song are reminiscent of the desperate and deep faith in the future inherited from the Soviet period: “We wish you happiness, happiness in this big world.” Today, this song no longer carries such positive overtones in Visaginas, as the nuclear power station was closed some time ago.

In addition to this main feature, we hear the voices of a group of housewives talking in Russian. They talk gloomily about the limited possibilities for spending their leisure time in Visaginas, and the importance of doing their best to keep themselves in good shape, despite the lack of admirers.

“Spinsters”, 2003, single-channel video, 4 min
The action of this video is set in the Vilnius girls’ foster home. A brick wall, behind which one can see a dilapidated Russian Orthodox Church, situated in the territory of the foster home, hides the inner rhythm of its life – the girls’ daily joys and sorrows.

On the occasion of the end of the school year the girls present a performance, the highlight of which is the “spinsters” show. We don’t see the show itself; it is conveyed by means of several details: a crackling record of a Lithuanian pop song about love, a four-line verse from the “spinsters” show, the back of a young “spinster” looking like an old woman. Despite the girls’ attempts to make jokes on the theme of “spinsters,” these fragments arouse melancholy, as they express the teenagers’ social isolation. 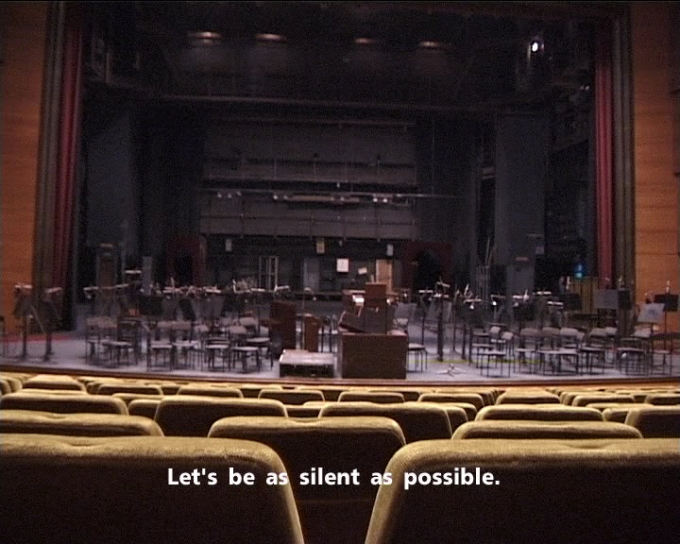 “Rehearsal”, 2002, single-channel video, 9 min
This video captures the empty stage of the Lithuanian National Opera and Ballet Theatre filled with sounds. The singing of the “Liepaitės” choir, carrying as if from backstage, reminds us of Soviet times, when this girls’ choir was popular in Lithuania. The “Liepaitės” still exists and gives concerts, but unlike before, the pop-music industry has now expanded and outstripped the “Liepaitės” — that hitherto claimed the special audience attention.

A conversation between the young choir girls recorded during the break of the rehearsal about unprotected sex and the increasing birth rate seems to reveal their intuitive gendered longing for child birth. In general, and according to the US critic Wayne Kostenbaum the vocal organs can be metaphorically associated with the female “instrument” of reproduction.

Once the rehearsal resumes after the break, we hear a strict choirmistress whose insistence on seeking a higher quality of singing can be metaphorically perceived as an attempt to prepare the girls for a mature femininity.